This part is going to a little shorter than the other ones because I wanted to keep all the bonding and thirsting in one post and the upcoming NSFW stuff in another.

I found it cute how once Mitsugi and Azuma were back in the loghouse, Azuma closed the door and Mitsugi turned on the lights, and Azuma’s narration informed us that this has become sort of a daily routine for them now. Glad to see they are functioning well as roommates despite the rocky beginning (◕‿◕✿)

Azuma sighs as the accumulated exhaustion from that day’s events hits him. He’s like “wow, to think a day would come when returning to this mess of a room would feel relaxing to me”. He doesn’t, however, forget to make fun of Mitsugi who is manspreading on the bed and is like-

Seriously, contrary to his looks this guy really isn’t elegant at all.

Wooh~? ⊙ω⊙  Should I interpret this as you complementing Mitsugi’s looks as elegant, Azuma? 😏 Azuma stares at Mitsugi wondering how the latter can stay so normal even after the deaths of 2 people, and Mitsugi glares at him when he notices the staring.

END_OF_DOCUMENT_TOKEN_TO_BE_REPLACED

The next day Azuma wakes up yawning. I got really worried at his “It seemed like I had slept with my face stuck on the floor, so there was a puddle of drool on it”, did this fool not use a futon after all!? ლ (#｀ﾛ＾;)> Let’s hope that he just rolled around enough that his face ended up touching the floor…. 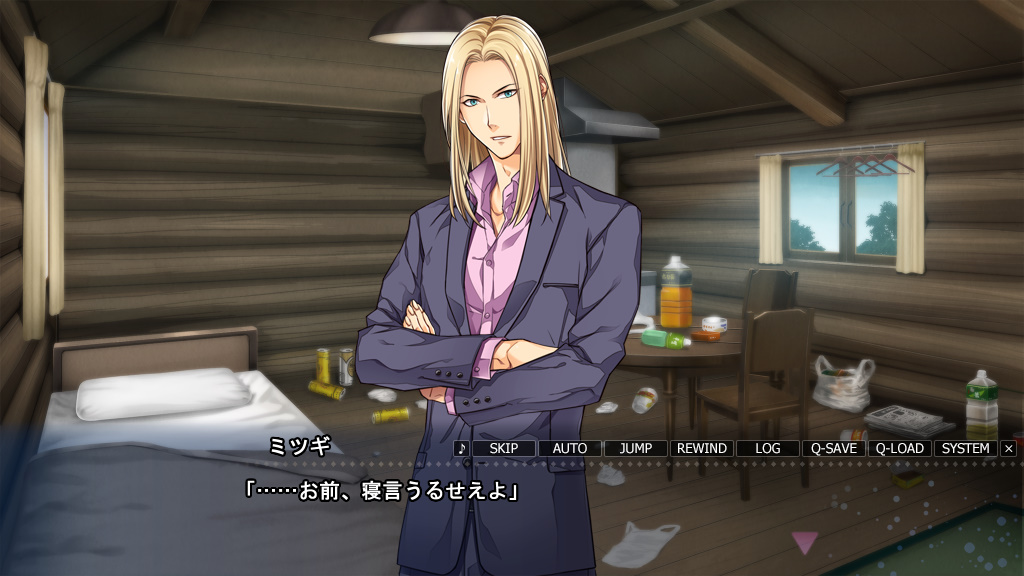 END_OF_DOCUMENT_TOKEN_TO_BE_REPLACED

Azuma keeps tiredly rolling on the ground even as Mitsugi finally unties him (I laughed so hard at the narration of grass getting stuck on Azuma’s wet dick (˵¯̴͒ꇴ¯̴͒˵) ). Mitsugi is like “roll if you wanna but first put away that filthy dicc” and that makes Azuma return to the world of living and reignites his rage. Mitsugi is lucky that Azuma is not the violent type, I would’ve punched him waaay before this if it were me in Azuma’s place, and after this incident I’d break his leg (Azuma is physically much more fit than Mitsugi so he could do it if he put his mind on it). My mature boi Azuma actually holds back his urge to punch Mitsugi while telling himself that “injuring him would slow down the boat’s progress”. See Mitsugi?! He’s a good boy who’s serious about ensuring people’s survival, not a slacker like you believe 凸ಠ益ಠ)凸 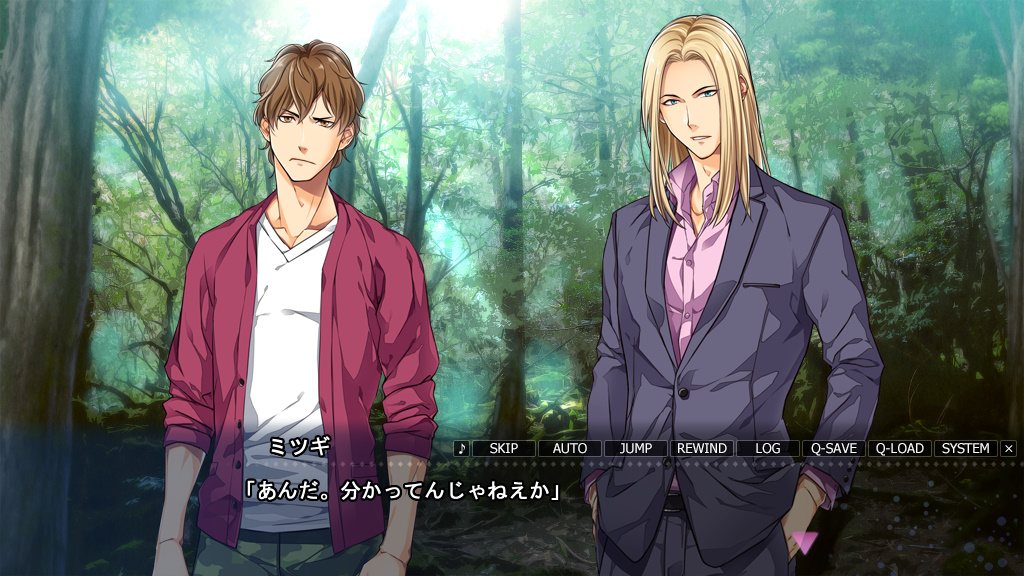 Azuma finally confronts Mitsugi and says that while he admits his fault in sleeping during work (I almost jumped into the screen to smack Mitsugi when he reacted to this part with “wow, so you get it”, THE NERVE OF THIS BITCH (ノಠ益ಠ)ノ彡┻━┻), that isn’t a reason for Mitsugi to embarrass him like this. He also asks Mitsugi if he did this because he’s gay, this feels like an insult to gay ppl lmao. Being gay wouldn’t be reason enough to sexually harass somebody ¯\_(ツ)_/¯

END_OF_DOCUMENT_TOKEN_TO_BE_REPLACED

From now on, I’ll be including lots of videos in the posts because the VAs of Paradise are freaking amazing and the tone of the character voices is very important in figuring out the hidden context in a lot of scenes. If a scene is crucial to understand the plot or a character (or if it’s just cool imo, lol) I will also include the text translation below the video in case you can’t see the video at that moment.

As promised, a SPICY scene for you all XD My apologies for being unable to censor the NSFW thumbnail of the last video, because it’s NSFW I uploaded it to google drive instead of YT, and GD doesn’t have the custom thumbnails option.

Azuma feels super attacked by Mitsugi’s tongue-lashing. (I felt sad at his monologue “Being called an idiot really rubs me the wrong way. I AM an idiot, but you don’t have to say it like that.” You’re not an idiot Azuma!! You’re a good, smart boi T.T) He thinks that it’s unfair of Mitsugi to blame him for a physiological response of the male body when he’s also a man. He angrily asks Mitsugi if he never gets morning wood and is detached from such baser instincts, but before he can finish his sentence, Mitsugi very casually admits that he also gets them and renders Azuma speechless.

Mitsugi does, however, state that him getting morning woods isn’t the issue now. He gets all uppity about it “look at you being lazy at work and popping boners while everyone is working hard for survival” uh no bitch didn’t Azuma already explain why he’s tired? (ಠ ∩ಠ)

(EDIT: I was super mad during my first playthrough and compared Mitsugi to a narc who’s convinced nothing is his fault, but I guess the problem is that both of them are thinking in parallel lines regarding the Azuma sleeping on the floor incident. From Mitsugi’s perspective, Azuma is a dumbass who didn’t look for the spare futon despite Mitsugi giving what he thinks is explicit permission, but in Azuma and also the player’s eyes Mitsugi is 100% at fault for turning off the light too soon and sending the wrong message. ╭(๑¯д¯๑)╮)

Mitsugi: Our food stock is low, the rescue isn’t coming either, and there has even been a casualty.
Mitsugi: Because we might end up dead too at this rate, we decided to make a boat to escape this place.
Mitsugi: Yet you dare skip out on that work to take a nap, then have the audacity to pop a boner…?

END_OF_DOCUMENT_TOKEN_TO_BE_REPLACED

Azuma forgets that Mitsugi is also in the shipbuilding group, plus he also has an interest in building things (like plastic model cars and the like) so he simply wants to try building a ship. He volunteersan y to join the shipbuilding group and Matauda, their de-facto-leader, is accepting of his decision. Mitsugi disapproves with a tut, making Azuma belatedly realize what he just signed up for (;´Д`). He wants to backpedal but loses his chance as everyone keeps talking about their own preferences.

Shimada is in shipbuilding group because he likes delicate work (Mitsugi is pleased and thanks him for helping out, wow niceness?), Takara wants to search for food (sasuga foodie boi (*°∀°)=3), Kido thinks that the food collection group needs more people so he also wants to join, Hongou plans to help out the shipbuilding group when he is not attempting to communicate with the mainland. During this whole time Azuma just keeps staring awkwardly and trying to get a word in and fails. In the end Matsuda answers him only when it is too late and everyone has chosen their groups, but Azuma still tries and asks Matsuda whether it is OK for him to be in the shipbuilding group. He wanted Matsuda to take a hint and put him in the food collection group by switching him out with someone else, but Matsuda just turns to Mitsugi and enquires if he has any problems with Azuma joining them. 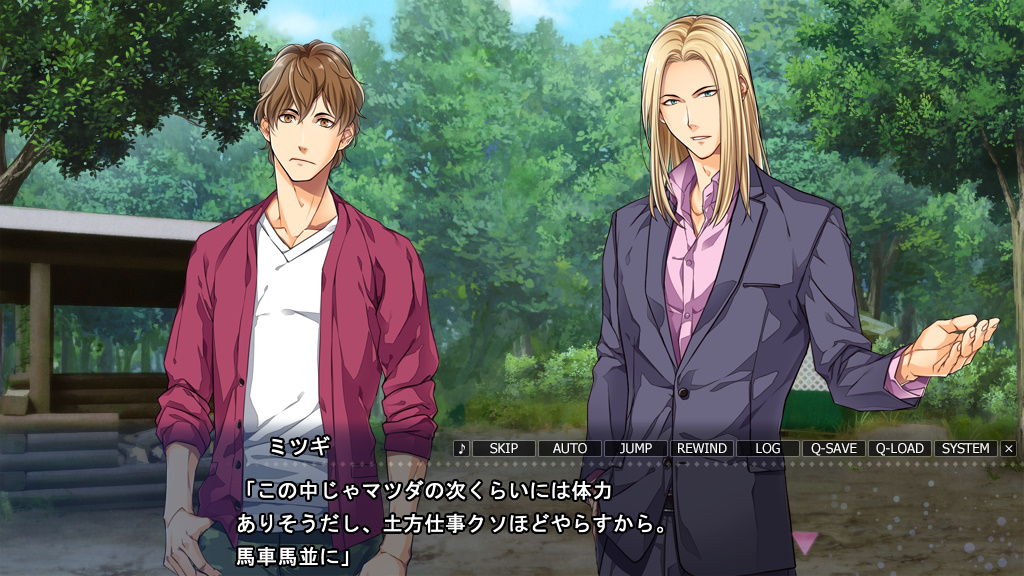 END_OF_DOCUMENT_TOKEN_TO_BE_REPLACED

"Don't let go of my hand" - The House in Fata Morgana

Fangirling at its best

Blerd with a Blog and a Love of 2D Boys

Welcome! It's great that you're here.

Full translation of Heart no Kuni no Alice PC game

from my heart to yours

Translating PersonA ~Phantom of the Opera~ into English for all the world to enjoy.